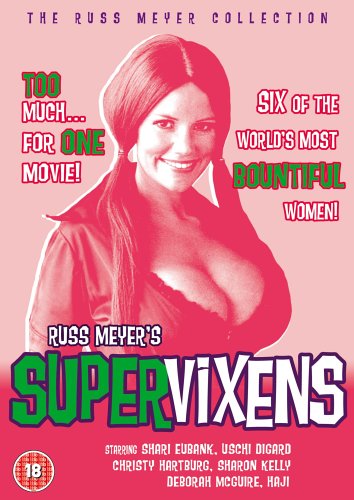 United Kingdom released, PAL/Region 0 DVD: LANGUAGES: English ( Dolby Digital 2.0 ), SPECIAL FEATURES: Commentary, Interactive Menu, Scene Access, Trailer(s), Uncut, SYNOPSIS: In Russ Meyer's 'Supervixens', Clint (Charles Pitts) works at Martin Bormann's filling station to provide for his beautiful but excessively nagging wife, Superangel (Shari Eubank). When a neighbor calls the police after hearing a domestic squabble between the two, the call is answered by Officer Harry Sledge (Associate Producer and Jonathan Demme regular Charles Napier). Harry takes a liking to Superangel and comes back the next day while Clint is working. Though Superangel attempts to seduce Harry, he is unable to perform, leading her to ridicule him. His violent temper leads him to murder her in the bathtub, which results in Clint being framed for the murder of his own wife. Hapless Clint then goes cross-country in an effort to clear his name... ...Supervixens (1975) ( Super vixens )
https://rapidgator.net/file/05acae1d045bd6764b7f34de6be2c738/Z1pxsI10W.mkv.rar.html